After sleeping rather badly last night I finally got up around noon today and started thinking about going out to a store. It was cool and cloudy, but the rain was delayed until later in the afternoon. It arrived before I had gotten ready to go out, and though the rain itself never got very intense, it was an electrical storm with quite a bit of impressive thunder.

It ended a bit after six o'clock and I finally got to go to the store. I now have a package of donuts, so there will be something for breakfast tomorrow. I also bought a package of frozen tamales. I hadn't intended to get them today, but the store doesn't always have them in stock, and when I saw that they had only one package in their freezer I decided I'd better buy them while I could.

Probably not the most exciting day of my life in Chico, but pretty close. Since I've made no plans for tomorrow, there's always a chance that it will be more exciting than today was. But being it will be be Sunday, probably not. The buses don't even run on Sunday here, so unless I get an unexpected ride somewhere I'll just be hanging around the neighborhood again.

Here is something by request. It is the photo I found in LJ Scrapbook of my long-gone cat Sugar. She turned up at my house one day in the early 1990s, and the first time I saw her she was hiding from my three other cats out by the side of the house. I managed to herd the other cats indoors, expecting that the new kitty would seize the chance to run back to wherever she had come from, but a moment later there was a loud bang on the front door, and the other cats panicked.

The door had three little diamond-shaped windows, and Sugar had climbed onto a brick porch rail and launched herself onto the door, and was peering in through the tiny window meowing. I knew then that she was determined to move in, hostile kitties or not. I searched the classified ads to see if anyone was missing her, but never found anyone. The other three cats never liked her, but she was younger than them and outlived them all. She died around twelve years ago, before Portia and the first of the feral colony turned up. She is buried near several other cats in the back yard of my house in Paradise. Those graves are among the things I'll miss most about that place. 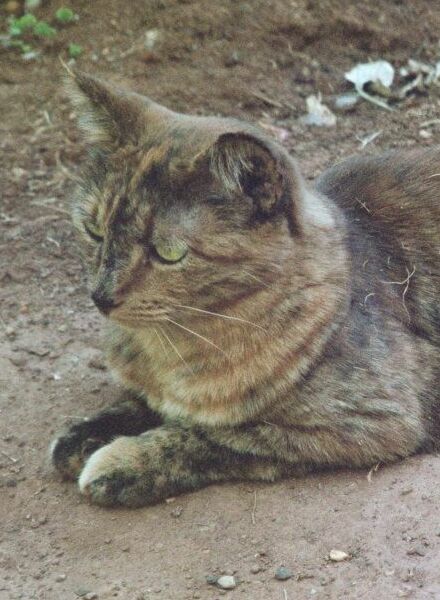 I felt somewhat queasy again today, and when dinner time came I didn't feel very hungry and didn't feel like cooking so I just had a snack. I found a bag of Bugles I had forgotten about and started munching them, and ended up eating half the bag. That made me thirsty so I downed a bottle of beer. Now I'm queasier than ever. I kind of suck at feeding myself. I'd have been better off getting a burrito from Taco Bell. Also I've been sneezing this evening, and don't know if there was some pollen in the air today or if I'm coming down with a cold. If I hadn't ruined my appetite with oily snacks I'd heat some soup. Maybe I'll settle for a few crackers and go to bed.

This first, of course: