So it was another very warm day, but I didn't go anywhere. There was nothing I needed from any of the stores, and these days I seem to need that excuse to get out. Without it, I just can't generate enough energy to leave the apartment. I might or might not go out tomorrow, though if I don't I won't have a breakfast donut Sunday. There is a 70% chance of rain tomorrow, but I expect there will be some breaks in any rain that does come. And the cooler temperature might give me more energy for venturing forth.

The cooling will be brief. Next week the highs are expected to get well into the eighties. I checked the forecast for Paradise, and it's going to be four to six degrees cooler up there than it will be here, all week. I am not at all looking forward to spending the summer in the valley heat. And this is way too early in the year for it to be starting. Seeing that I lack energy already, by July I'm likely to be nearly comatose day in and day out.

As the weather warms up people are using the bike path later at night. The dog who lives on the other side of it is also being allowed to stay outdoors later, and barks at the passersby. Oh, I said passersby, and it reminded me of the books of Pierre Reverdy's poetry I lost to the fire. He used that word in some of his poems, and though I'm trying to remember a few lines of them I can't. Being reminded of those books, my thoughts leap to all the other things lost. I don't like being reminded of all the things I'll never see again. Especially because the cats inevitably come to mind.

But I have seen a few things I never expected to see again. I had occasion to look through my LJ scrapbook tonight, and found several photos I had forgotten I'd uploaded to it. One of them is a photo of Sugar, a cat I had who died many years ago. As all the photos I had of my other cats were lost, I was glad to see this one, though it also makes me terribly sad that it is the only one. I also came across two photos taken in my yard, one of them looking up the block from my front porch following an April snow. I don't remember what year it was taken, but it must have been in the 1990s, which I think was the last time we had snow that late in the year. A last glimpse of Paradise as I once saw it. It will never look like this again. 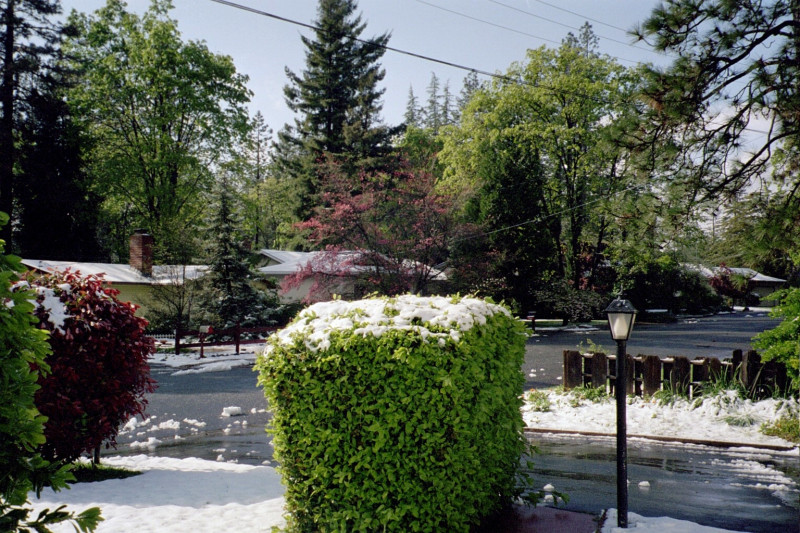